From a white ground

If I were to say to you, or you to me, I come from a white ground, what would we see in our minds’ eye? I may see an ancient place where bleached ruins and relics lie partly buried by shifting white sands. Or snow. You might see shimmering spectral forms approaching the present from afar, the scene as indistinct as an overexposed mirage in blinding light. A whiteout. Extremes. Desert heat. Polar cold. Silence. A place, or space, where the elements of ground and light are foremost. For visual artists though, the exhibition title’s reference to unmarked white ground is the classical material beginning. It means a freshly primed canvas, a crisp sheet of blank paper, a lump of unformed clay, with all the expansive potential of unexpressed pictorial expression locked into a surface of blank and impassive whiteness. For a painter a white ground is the first layer, an underlying source of light and luminosity that can be returned to, to let light in, during the making of a painting. For a printmaker white is the negative ground, the space untouched by impression or ink.

A white ground is also a tabula rasa, the Latin term literally meaning a scraped tablet, a used and reused surface, marked and then scraped back, bearing as history all the incomplete residues of past messages. This makes it all the more appropriate to describe the continual development and communication of the abstract visual language common to the practices of Nicole Ellis and Barbara Halnan. In this joint exhibition From a White Ground they present new works, developed separately yet linked by their ongoing dialogue with white ground. Each set out to investigate the role and meaning of white ground by allowing it a certain primacy as their works emerged from and engaged with it. The rasa action, of scraping back, provides a telling analogy for Ellis’ textile collages on canvas, which rely more on innate materiality than intervention to convey meaning. In Ellis’ work the white ground appears in two states; the initial white of canvas, recognisable as every painter’s beginning, but also in the subsequent over painting in white, which is never solid but is often abraded and in doing so stands for the passage of time.  Conceptually, the philosophical notion of tabula rasa as a blank state of mind open to the reception of empirical sensation is perhaps more descriptive of Halnan’s work, based on arithmetic units and patterned sequences of progression, tone and scale. Each artist explores the concept with rigour and also a certain austerity such that, when seen together,, the works come From a White Ground in ways that function both as asceticism and aesthetic.

Ellis’ Light Ground series consists of 6 identically sized rectangular canvasses, each one named and developed around a particular muted hue; purple, grey, brown, red, gold and pink. Pursuing her longstanding interest in found colour, found shape and the repurposing of textiles, remnants and offcuts of manufactured decorator fabrics are laid down in rectilinear constructions and combined with areas of paint and other markings. The textile pieces and other elements are placed according to the rectilinearity of a grid, referencing the historical traditions of concrete and constructivist art. The effect is also to eschew the movement and dynamism of diagonals in favour of structure and consolidation, slowing down and pacing the viewing. In Ellis’ work the hand is restrained in favour of materiality, and what a poignant material story is told. These carefully salvaged pieces with their scarred and degraded surfaces convey the passing of time with every overlapping layer of fabric, each partly obscured design, each echoed pattern, each familiar motif. Like turning the pages in a book, they build a sense of time and of loss. As many of the designs are derived from domestic offcuts, the narration deviates into the personal suggesting once familiar living spaces, curtains and upholstery of recent memory. Beyond the personal though is the knowledge that textiles have since ancient times been such rich sources of social history, meaning and making.

In Halnan’s works, the white ground acts as that clean slate, a renewed and primal state with forms, structures and patterns rising up from it, establishing and building the composition up from the ground. There is a sense of orderly and decisive movement yet, also beneath the purpose, something tentative, as if testing the stability of ground for the first time. While the titles of Halnan’s works, Wandering and Meander suggest an equivocal journey; others like Numbers and Faultline evoke precision and systems. The rectilinear grid is referenced again, with works where 9 and then 25 individual panels function as discreet elements of a whole square. Within the square, elements of line, texture and colour riff and repeat the pattern. The equivocation, like a melody, is contained in the hand drawn lines of graphite and in the delicate and sparing use of colour, only pale yellow and silver-grey, like shadow or reflected light. Textures when present are tenuous, in a barely raised edge, a rippling of surface, soft as sawdust swallowed into paint. Geometry is very much in play, with motifs repeated, flipped and reversed. Halnan’s crafting takes these constructions to crisp precision. Notably, in each work there is some element of relief; either within the work itself or between the work and the wall. This modelling, lightly done invites the viewer to perceive actual space within the work, and so creates a lifting off from white ground, a lightness.

If we were to walk on white ground through that bleached and ancient place we first imagined, visibility would be reduced and other senses heightened. Similarly, the priority given to the role of white by Ellis and Halnan in this exhibition enables other formal elements and long held interests in their practices to come to the fore. If white is about beginnings, a new page and a freshly scraped wax tablet then Halnan’s work, based so fluently on rhythm, scale and order rises from it like a piece of music. And if that was a beginning, then Ellis’ work with its pieced layers of loss and erasure is evocative of endings, of the action of time and memory having passed over, leaving only material traces. 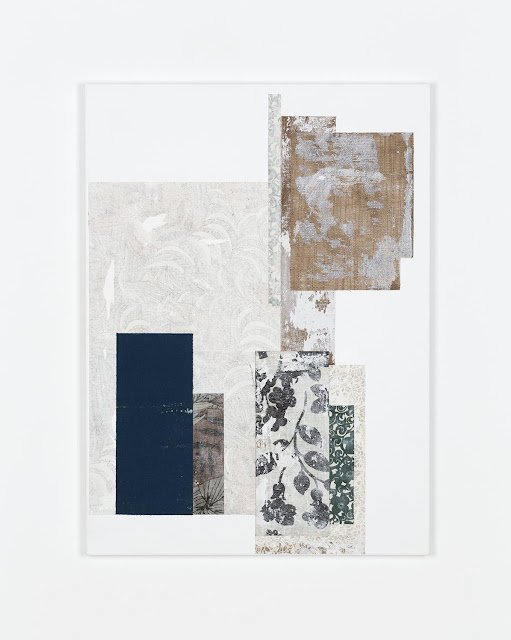 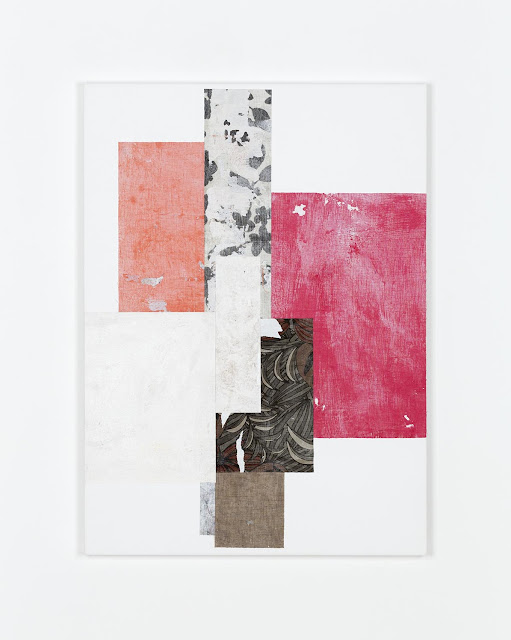 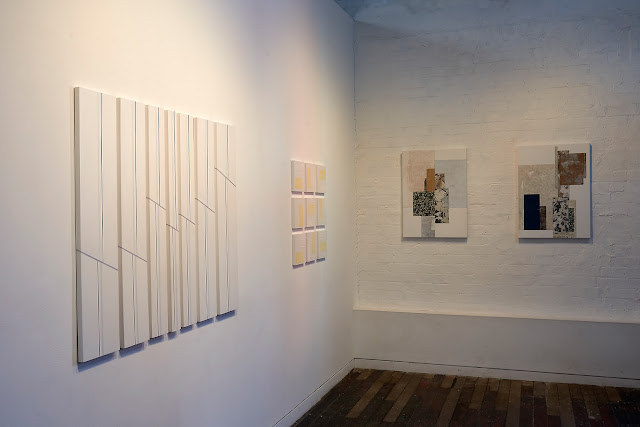 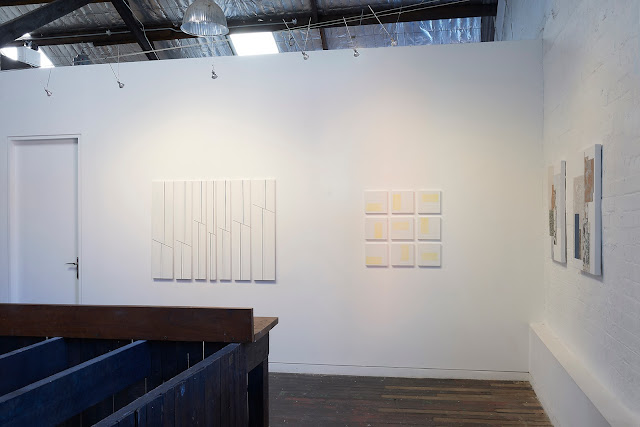 
Thanks to Sue Blackburn for the photographs.
Posted by Barbara Halnan at 12:47 AM No comments:

Art in the Park, Marrickville 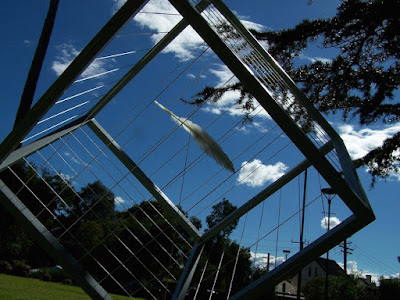 "Flight" - a whimsical piece made for Art in the Park in Marrickville in about 2004 - not sure of the date.  The feather could represent a captive bird, or what remains after the bird has flown.
Posted by Barbara Halnan at 10:09 PM No comments:

More from the archives 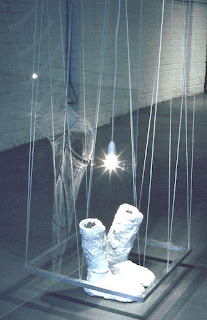 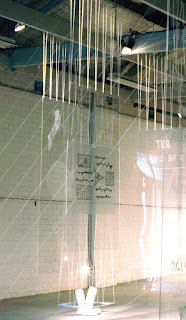 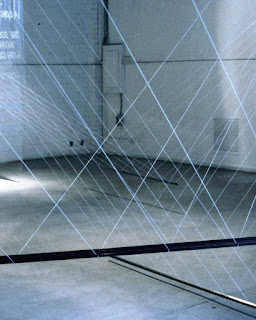 These images are from "The transience of soap" at the old Tin Sheds Gallery at the University of Sydney in 2001.  It was a collaborative installation between Rose Ann McGreevy, Barbara Halnan and Warren Summers who orchestrated sound elements.

Posted by Barbara Halnan at 10:00 PM No comments: 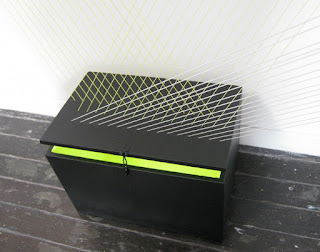 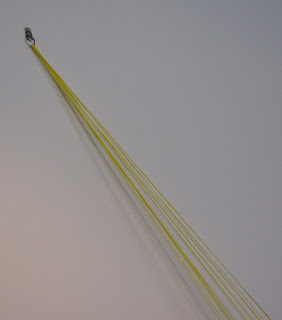 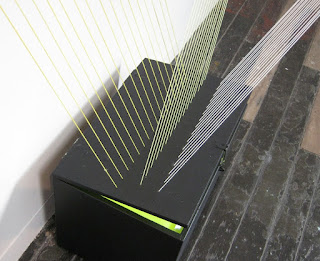 Black Box: installed at Articulate Projectspace in the end of year show in 2014.

Coming shortly after the death of my long-term partner, the construction of this little piece perhaps represents the coming out of a very dark time in my life. Colour was an important aspect of the work – the choice of yellow as symbolic perhaps of light, the three shades of the strings – all this was important at the time. A bright yellow light comes from the interior of the box (a found object) and the strings soar beyond its confines. 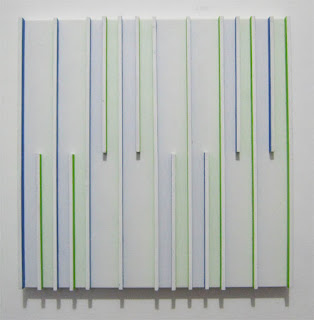 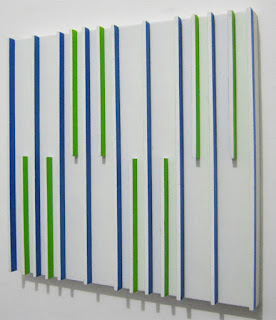 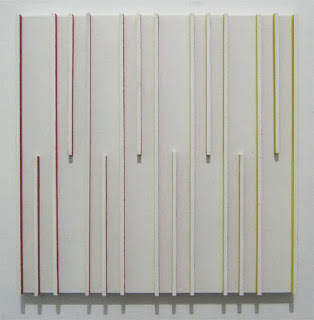 Study in Yellow/Red 2016
Acrylic on MDF panel 35x35 cm.
In these small panels I was playing with the kinetics of colour - the movement of the viewer past the works causing shifts from one colour to the other.

Posted by Barbara Halnan at 10:05 PM No comments:

Study with Blue 2018
Acrylic with collage on board. 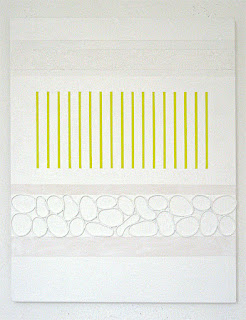 Study with Yellow 2018
Acrylic with collage on board.

These two small works have been sent to Paris to be shown in Galerie Olivier Nouvellet, Rue de Seine Paris in September 2019.  Exhibition organised by Christine Boiry.
Posted by Barbara Halnan at 10:59 PM No comments: 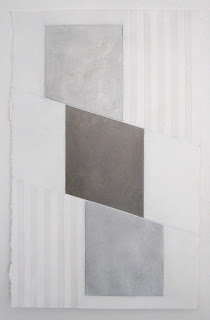 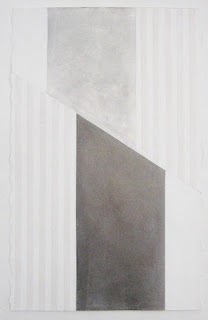 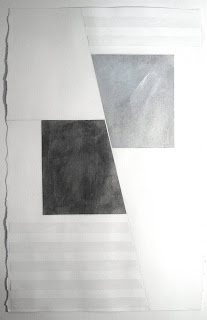 About drawing within the framework of concrete art-making.

Playing with two, three, sometimes more elements, working with the way in which these elements interact. For me the keyword is 'exploration'. A drawing is a piece of work that may perhaps lead on to something else, and I think it is for this reason that drawings I do are rarely 'one-offs'. One thing leads to another, and another and each stage may open up possibilities which also need to be explored, but in the end the drawing exists as a thing in itself.
The starting point: the first mark - the "what if" factor: in the case of these drawings, the first mark was an angled line across or down the page. I have been  interested in the idea of slippage - a form broken by a break which allows one part to move in relation to the other, thereby breaking the balance, the monumentality, of the whole form, hopefully creating a tension within the work.
Within these parameters there are still variations possible: should the form float in space, or be anchored by the edge of the paper; how do the forms in the drawing relate to each other; should the form be symmetrical, or a-symmetrical? The question of proportion, the visual "rightness" of the overall image - what works and what doesn't - a totally subjective judgement perhaps.
These mixed media drawings (from a set of six related works) are to do with the notion of "slippage" - an exploration of what happens visually if a shape is broken into parts by a line cutting across it.

Posted by Barbara Halnan at 10:48 PM No comments:

Another small drawing - an interpretation of landscape.


Posted by Barbara Halnan at 12:06 AM No comments: